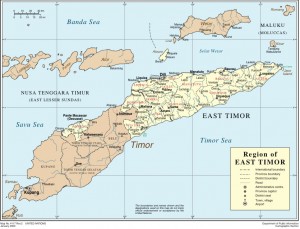 The island of Timor is Australia’s 2nd nearest neighbour after PNG. The shortest distance between a point on the West Timor coast and a very remote point on Australia is 466.2 km. From Dili to Darwin it is 695km as the crow flies, but it is 3,737 km from Melbourne. Measure it yourself here.  From Melbourne to Denpasar in Bali 4,409km. Compare this to the distance from Melbourne to London in the U.K. where our Queen lives which is 16,922.7km as the crow flies or Melbourne to Washingtoon U.S.A. 16,401.9,  Proximity  is an interesting question when it comes to neighbourhoods, friendship, history and national interest as shown by just this one news article in the on-line news service International Business Times. A short recent history of Australia’s role in preventing the Timorese from exercising their rights to the income from the oil and gas reserves in the Timor Sea can be seen in Black Bullion here. (Dur: 5 mins). Things have changed since this documentary was made but the Timorese continue to fight.

Dampier, landed on the Australian mainland at King Sound nearly a century before James Cook’s and Arthur Phillip’s landfalls in 1688.  But the English were not the first arrivals in this area. Charts show that the Portuguese, who had already established trading posts in Timor, knew the northwest coast back in the 16th Century.

Following the discovery of the Pinctada Maxima, the world’s largest pearl oyster shell, in 1861, in Roebuck Bay, Japanese, Filipino, Timorese, Indonesian and Malay pearl drivers flocked to Broome, joining Aboriginal divers, seeking their fortune in the pearl industry and soon Chinese shopkeepers came to support the industry. Broome was established in 1883, as a port for the already flourishing pearl industry. Get the Wikipedia version of Timor’s history of ‘discovery’ by European adventurers here.