August 30th, 2011 jen Posted in Events Comments Off on Pat Walsh on Justice

Long-time activist who has worn many many hats to assist East Timor gain independence and recover following the ballot in 1999, Pat Walsh was the Special Advisor to the Commission for Reception,, Truth and Reconciliation in Timor-lest (CAVR). Now Pat has put together an exhibition of his personal photographs for an exhibition and is giving a a talk on his time in Timor-Lest and in particular, the options for achieving justice, twelve years on from the 30th August, 1999 Referendum.  the talk will be  held at 7.30 pm on thursday 1 September at the Brunswick Library in Melbourne. The exhibition of photographs will be on display in the Library foyer from 22 August to 5 September (including weekends). There will also be a display of reports and other material published by the CAVR in the Library Reading Room. 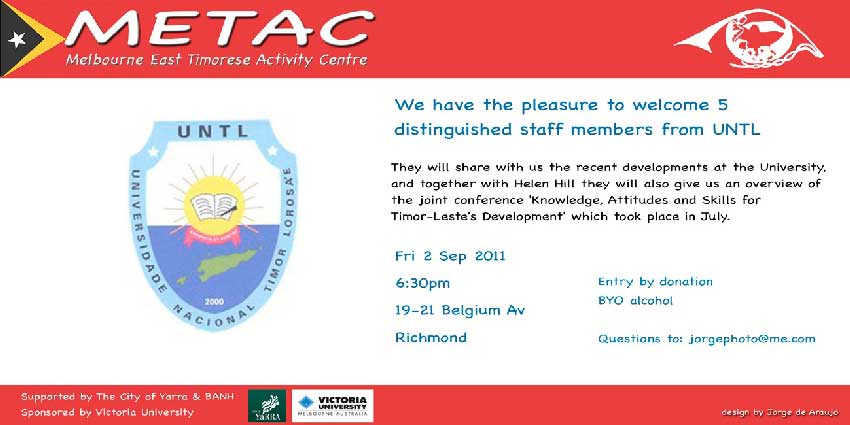 You can see  photographs of the beautiful carpentry and carvings in the newly built Uma Lulik in Fohoren and read about it here in an article written about traditional culture by youth media students in a  digital writing and photography workshop funded by the Friends of Suai in July 2008. See Photographs of Fohoren Uma Lulik. Fohorem is in the mountains several hours drive from Suai over very rough terrain. More about traditional culture in East Timor...

Over 200 people attended the event to celebrate the 10 year friendship with the signing up of a further ten years. At the same time a new strategic plan was launched together with a bookazine titled The Spirit of Friendship which is available from the St Kilda Town Hall Assist desk.
[Show as slideshow]

The City of Port Phillip together with Friends of Suai have issued a public invitation to  you to attend a Community Reception. It will be attended by  the Timor-Leste Ambassador to Australia, Abel Guterres, Deputy District Administrator Covalima, Teofilo do Carmo and Community Centre Coordinator Alberto de Jesus Barros. The event will be given some sparkle with the musical presence of the DILI ALLSTARS (Acoustic Band) & the Tebe Cultural Group which includes Timorese singers and dancers from the Victorian community. The occasion is being planned to celebrate Port Phillip Council signing of a  Friendship Agreement that will see the community friendship with Suai continue for another ten years.  A brief history of the friendship in the form of a bookazine will be launched together with a strategic plan that outlines the priorities of the group over the next ten years. Date: Monday 18 October, 2010 Venue: Auditorium, St Kilda Town Hall Time: 6 pm – 8 pm RSVP: 4 October 2010 Phone: 9209 6777 or Email: rsvp@portphillip.vic.gov.au President of Timor Leste has sent his apologies for not being able to attend this event as planned.

Connections Across the Timor Sea Exhibition

Connections across the Timor Sea 1941-2010 was an exhibition put together by the Friends of Suai as the first of a range activities planned to celebrate ten years of friendship with Suai. The exhibition was mounted  in partnership with local filmmaker Jen Hughes, artist Liz Milsom photographer Richard Jones and the Suai Youth Centre.

Held from mid-May to mid-June the exhibition included a video installation by Jen Hughes, Watercolours, letters, artefacts by Sgt George Milsom and Photographs by Suai youth.  It was opened by Abel Guterres, Timor-Leste Ambassador to Australia. Jen Hughes has been following the Friends of Suai friendship and documenting it since December 1999. In her video titled 'Unforgettable Selections from a Friendship'. Jen took the opportunity to bring some of that experience to the audience and highlight some of the art of Suai youth documented in the streets of Suai, or on canvas, in workshops and on-line using new media tools in suaimediaspace.ning.com. George Milsom is the father of Port Phillip local artist Liz Milsom, who is a member of the Friends of Suai. George Milsom enlisted in the army and became a member of the 2/40th Battalion, that travelled to Kupan in Dutch Timor on the 8th December 1941. He later joined the 2/2nd battalion in East Timor. You can read more about him here. The photographs in the exhibition were taken by Suai youth in a photography workshop with Richard Jones in Suai in 2009 which is documented here.

At a meeting of the Council of Port Phillip in May an extension to the Friendship Agreement with Suai was agreed to in principal.

Since then the Friends of Suai have been celebrating the ten years with a range of activities. The first was an exhibition held in The Gallery St Kilda Town Hall in May-June titled Connections Across the Timor Sea – Memory Friendship and Future. Opened by the brand new Ambassador to Australia, Abel Guterres the exhibition showed the history behind the friendship that dates back to WW2 through the work of Sgt George Milsom father of local artist Liz Milsom. It also provided a platform in a physical gallery space for some of the most recent work of the media group here on Suai Media Space social network as well as some of the work by Suai youth in a Photography workshop held last year in YoMaTre. On September 9 President Jose Ramos Horta will visit Port Phillip and attend a civic reception to be held in the St Kilda Town Hall. On the following day the 10th September Friends of Suai will hold a Schools Forum in the Town Hall. President Jose Ramos Horta will give a speech titled ‘Facing the Future’ about regional partnerships and getting connected with our Asian neighbours as well as the challenges and rewards for Australia. According to Co-ordinator of Friends of Suai Pat Jessen  a federal politician, still be be announced, will be speaking on the real challenges regional politics has for ordinary Australians. Schools are invited to attend and participate in a plenary for students to consider what they think about staying connected with East Timor.

In 2010 we are celebrating ten years of friendship between Suai and Port Phillip. See the Beginnings of the Friendship and History of Friendship that began in 2000 but is grounded in a relationship begun in WW2. Events planned in Port Phillip in 2010 include a colourful Bookazine on the 10 year friendship to capture the dynamics and development in a decade since the Ballot and the great friendship that has ensued. A Friends of Suai Exhibition at the Town Hall Gallery starts 26 May 2010 to reflect on Friendship. The exhibition, which will show the depth of the history of friendship between the two communities will include water colours painted in East Timor, artefacts and letters by George Milsom. Milsom who was in 2/2nd Independent Company in East Timor in WW2 is the father of local artist Liz Milsom.  An installation titled: 'An Imagined Conversation: from Rocks to Social Networks' is planned by Jen Hughes, local filmmaker and a selection of photographs by the youth of Suai from a 2009 workshop conducted by former St Kilda resident Richard Jones will be mounted. In the pipeline too, is a Tour to parts of East Timor including Suai linked to International Rotary. The aim is to match skills with small projects where the visiting tourist can share with local people. The gossip is Intrepid Tours will return to East Timor in 2010. We are also hoping that Australia’s Circus Oz will visit Suai in September 2010. Thanks to Paul Stewart of Dili Allstars fame for including Suai in the plan! We heard today that plans are on track for the Tour with a bit more fundraising to go. Watch this Space for more news on celebrating 10 years of friendship.

Chamot - co-ordinator of the Uma Media and YoMaTre has just uploaded this video from Suai. This is a historic moment in the history of the friendship that comes just one month after the 10th Anniversary of the massacre and the surround events that led to the formation of the friendship ten years ago. Notisias Dokumentario Yo-Ma-Tre. Nebe Kobertura iha fulan setembru 2009. Find more videos like this on friends of suaimediaspace