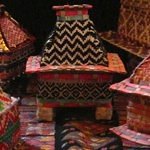 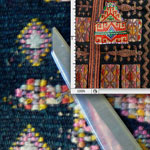 The Real Political and Cultural Meaning and Short History of Koba Lima and Suai
Koba Lima literally means Five (Lima) Basket (Koba) as shown by this photo, although the big basket is not koba but tanasak (used for cook and uncooked rice, corn, millets, meals). This is simply because we do not have enough koba like the other three.

Culturally, koba is used for (1) putting betel nuts and lime to respectfully welcome quests, (2) putting money, such as silver coins or gold coins for exchanges during the traditional weddings and other communal ceremonies, (3) putting betel nuts, silver and gold coins used as offerings to gods and goddess as well as to ancestor during the religious ceremony. Koba plays an important role in strengthening respectful relationships between individuals and between communities.But Koba Lima here have a symbolic political meaning. They symbolically referred to five kingdoms (a coalition of five kingdoms) or symbolized five kingdoms which consisted of Fatumea, Dakolo, Lookeu, Sisi and Maudemi. Initially, there were only three kingdoms, called Uma Tolu (uma = house, tolu = three), which consisted of Fatumea, Lookeu and Dakolo.

After a bitter war with the Portuguese, two kingdoms joined Uma Tolu and formed Koba Lima as a coalition of five kingdoms. When Timor was divided into two in 1859 by the Portuguese and the Dutch, the Five Kingdoms, against their will, were also divided. Thus, Fatumea, Dakolo, one half of Lookeu belonged to Portuguese Timor, while Sisi, Maudemu and another half of Lookeu to the Dutch Timor. It was a painful imposed separation. This was a separation of families and their lands and cultures. The pain of this separation is still felt until today for people along the borders who still remember the history and who still fail to be culturally colonized. It is an open veil for people of Koba Lima and their descendants along the colonial imposed borders. Space does not allow me here to write more about this. (Map Timor)
The Portuguese spelling of Cova Lima (perhaps was intentionally done) gives symbolically derogatory meaning to Koba Lima, that is, the Five Graves or Five Holes because the Portuguese word cova means grave or hole. Thus Cova Lima means that death or grave of the Five Kingdoms. But among the “illiterate” people of Koba Lima, the Portuguese spelling has not changed the indigenous pronunciation and meaning. It was and is the culturally colonized literate (the mis-educated or colonially educated) who followed the colonizers and maintained this derogatory meaning and felt proud of the Portuguese spelling of Koba Lima, and perhaps unconsciously feel inferior with the indigenous spelling. It is the so-called literate who were and are very successful in being culturally colonized and felt proud of it and continue to use and enforce that derogatory spelling. People of Koba Lima in Dutch Timor (that became Indonesian Timor in 1949) also still see themselves as the Koba Lima people, although not among many literate who look down at their own indigenous culture, language and history. But unlike in Timor Leste, they use the indigenous spelling (Koba Lima) instead of the Portuguese one (Cova Lima).
Equally as important as political and economic de-colonization are cultural de-colonization and the de-colonization of the mind. A form of cultural and mind de-colonization is de-colonization of the names, in the sense of people need to culturally rename their names and places, such as, Cova Lima to Koba Kima, Viqueque to We Keke (We = water, Keke = bracelet), Motail to Mota Ain (mota = river, ain = feet), Liquica to Liku Saen (python) and many others. These portugusized indigenous words change the indigenous cultural meanings and history. Cultural and mind colonization is very successful when people feel inferior and ashamed of their own culture, language and names as well diets.
During the colonisation era the indigenous rebellious kings were replaced by the Portuguese and Dutch appointed kings who were loyal to the Portuguese and the Dutch and serve their colonial masters, but culturally people respect the real traditional kings who really care for their own people and who were also seen as having spiritual powers. The kings who were loyal to and appointed by the colonizers (the Portuguese, the Dutch, the Japanese and the Indonesian) were feared but not honestly respected and loved by their own people as they were opportunistic and did not have spiritual charisma and as such legitimacy.
Originally Koba Lima did not included Suai. The Portuguse used the derogatory meaning of Cova Lima to include Sui and other subdistricts (as they are now), when the Portuguese moved its Centre of government from Fohoren to Suai in 1960s. Suai had its own kingdom. It was the Centre of the great kingdom, We Hali.

Suai originally comes from the three Tetum words su rai henek. Su means to dig, rai means land or earth, henek (grains of stone), rai-henek (means sands). Thus su rai henek = digging the sand, referring to place where people used to dig the sands used for construction during the Portuguese era. For the sake of easy pronunciation, people just used “Su Rai”, which later became Suai, and as such, Su Rai loses its meaning or becomes meaningless.
Initially, the Centre for the Portuguese government along the border was in Bobonaru (district of Bobonaru) which includes the district of Bobonaru now and the district of Cova Lima now. Then in 1950s Koba Lima and Suai had its own district with its Centre of government in Foho Ren (which is now a subdistrict of Cova Lima), and then in 1060s the centre of the government was moved from Foho Ren (foho = mountain, ren = peak) to Suai.
Melbourne, 6 May 2010.
Balthasar Kehi