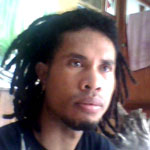 Natalino (Anata) dos reis Pires is an accomplished senior artist in residence in Arte Moris http://www.artemoris.tp/ in Dili the Free Art School. He comes from Suai Loro which is about 20 minutes drive from Suai on the Timor Sea. Some of his  portraits and a selection of landscapes were included in the Arte Moris Bundoora Exhibition in May 2009.

In 2005 artists began painting on to tais – see slideshow of this work here that includes some beautiful portrait and landscape works by Natalino painted on tais.

Hover over the images for navigational information and click on the image to navigate to extended slideshows showing the full paintings. 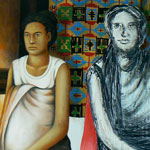 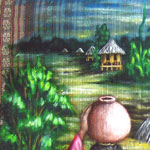 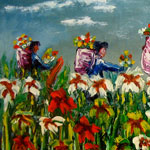 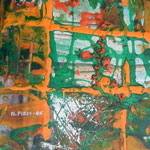 In Natalino’s paintings. traditional culture, landscape and portraiture are integrated.  His work shows a strong interest in representing women. He shows women as workers who represent the ‘site’ of  traditional culture and the site of change. The sheer number of female subjects in his paintings is noticeably greater than that of the other artists represented. They are painted as dynamic: carrying a workload:  carrying wood, vegetables or water, dancing, sorting rice and pounding. An exception is ‘Amali II‘, (in the Bundoora Exhibition) which is a profound image of the silence of a traumatised woman and those of modern women looking on at others working or gazing into the future.

The clothing the women wear and the way the artist paints their hair are all telling us the story of change taking place in women’s style and their growing preference for western-style hair, clothing and jewelry. Male figures are largely absent; when they are present, they are represented alongside women. In ‘Tradisaun Cultura‘  he has included the tais pattern of his region as a curtain covering the left side of the face of a young Timorese woman with her hair down in the modern style peering out over a  scene of a traditionally dressed woman carrying water.  The two views of women dancing in the landscape appear as sculptures, monumentalised, perhaps representing a traditional practice he sees moving into the past?  He has used this idea of monumentalising traditional culture in ‘Moris Foun‘ although this time there are two one dimensional figures seemingly cut from the plywood back-drop and covered in tais peering from the sea like ghosts, at a landscape cleared of tropical vegetation featuring rows of Pencil Pines. This is an interesting political comment but not as bleak and fractured as ‘polik-puta‘, ‘discriminisaun‘ , ‘motherless‘ and the lost souls in ‘liberty‘ which looks more like hell than the utopian idea of freedom that perhaps occupied the minds of Timorese before Independence.

Natalino says “My early drawing exercises were monitored by a friend of my brother from Indonesia who introduced me in different kinds of pencil techniques and how to analyze the shape of the object in the drawing. These moments made me feel free and since (those) days I (have) never stoped being creative, therefore art became my main passion in my life.” (Dili April 2009)
As a senior artist in residence at the school, Natalino also mentors their junior students. He is currently also studying English at the National University of Timor-Leste.  Natalino believes his paintings and sculptures help him to free his feelings in daily life. Sales of his work also help him to support his family.
Two of Natalino’s artworks, a linocut ‘Display of Dignity’ and a portrait in oils on cloth titled ‘The Future is Bright’ are featured in the exhibition and catalogue ‘From the Hands of Our Ancestors’ (Arteno artesantu Timor-Leste. The art and craft of Timor-Leste. The exhibition is in the Museum and Art Gallery Northern Territory (MAGNET)  until the end of July 2009.
Natalino’s guiding principle is “Do not give up before you try to do something that you like to do in your life“. “Every good thing will bring brightness for your future.”