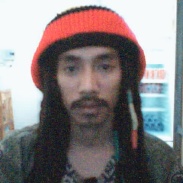 Chamot (full name Liman rasan Sancho Chamot Alves Nahac) was the first writer from Suai Camenasa to contribute his poetry. Chamot was a member of the Bibi Bulak (Silly Goat) Theatre Company in Dili for several years. He has contributed twelve poems all written in 2007 and 2008. The vast majority of them in September -October 2007.

Filomena dos Reis was the first writer I met. I met her in Suai when she was directing the re-enactment of the Suai Church Massacre for the local community to present to their friends and family and the international community on the occasion of the first anniversary of the massacre. Here Filomena has contributed a poem titled ‘A Long Journey to Independence’ written in October 1999.

When she is not writing Filomena is working for women and peace in Dili. That’s her on the right in the photo. 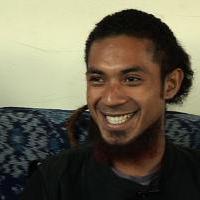 ‘The Hand’ or ‘Tangan’ is a short horror story by Melchiore dias Fernandes or Melli lead singer of popular band ‘Galaxy’. Melli writes songs and was featured in the asia and pacific writers network website following Melli’s attendance at Sydney Writers Week and the Darwin Festival in 2006. Included not because he is from Suai – he is from Los Palos – but because he has become a friend of Suai on the way.