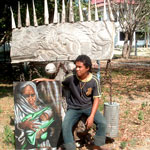 Mariano was born in 1988 in Cova Lima. He began painting in junior high school in 2000.  He took up his art education again in 2003 and became a senior student at Arte Moris in 2004 where he lives. His early ambitions were to become a doctor but his desire to be an artist and become an art teacher won the day.  Mari’s art shows a deep concern for the maintenance of Timorese traditional culture and an interest in political commentary in his art.