Chamot – co-ordinator of the Uma Media and YoMaTre has just uploaded this video from Suai. This is a historic moment in the history of the friendship that comes just one month after the 10th Anniversary of the massacre and the surround events that led to the formation of the friendship ten years ago.
Notisias Dokumentario Yo-Ma-Tre.
Nebe Kobertura iha fulan setembru 2009.

Find more videos like this on friends of suaimediaspace

Desleigh Kent a member of the Friends of Suai Committee has returned to Port Phillip after a trip to Suai with the English teachers with photographs of the Anniversary. The photographs show that as on the First Anniversary,  the remembrance ceremonies and prayers took place in the place where the massacre took place in Our Lady of Fatima Church, in front of that Church and under shade on the large grassy area in front of the unfinished cathedral.

The character and form of the remembrance symbols has changed over the years and the original circle of stones has been moved from the driveway in front of the Church to the side. The original Church that was rehabilitated after the massacre and the accompanying fire has been demolished and replaced with a new one.  Ergilio reported in a conversation on Skype that the people have stopped crying, and he is afraid that the story will be forgotten and justice is out of their reach. According to Australia’s Sydney Morning Herald article on the 7th September, The United Nation’s top human rights official Navanethem Pillay, says East Timor’s release of the Indonesian accused of crimes against humanity violates the country’s own constitution as well as UN Security Council resolutions rejecting impunity for genocide. Bere came across the border on a Visa issued by East Timor’s government, for his father’s funeral in August, in Cova Lima. When locals recognised him as one of the perpertrators of the atrocities in 1999 he was captured and handed over to the police, only to be released again on the orders of President Jose Ramos-Horta.

When approached by the local journalists in Suai for answers to why Martenus Bere was released Gusmao refused to answer them; a move that was very disappointing for the people who supported him and gave up their lives for Independence and democracy under his leadership.

According to the SMH Ms Pillay has asked the East Timorese President Jose Ramos-Horta for more information on the release of Bere. More –  http://www.smh.com.au/world/massacre-suspects-release-draws-warning-from-un-20090906-fcui.html

Click on the image to read by enlargement of rock messages painted  by Port Phillip residents to the people of Suai in 2001 & 2003. Posted on the occasion of the 10th Anniversary of the Suai Church Massacre 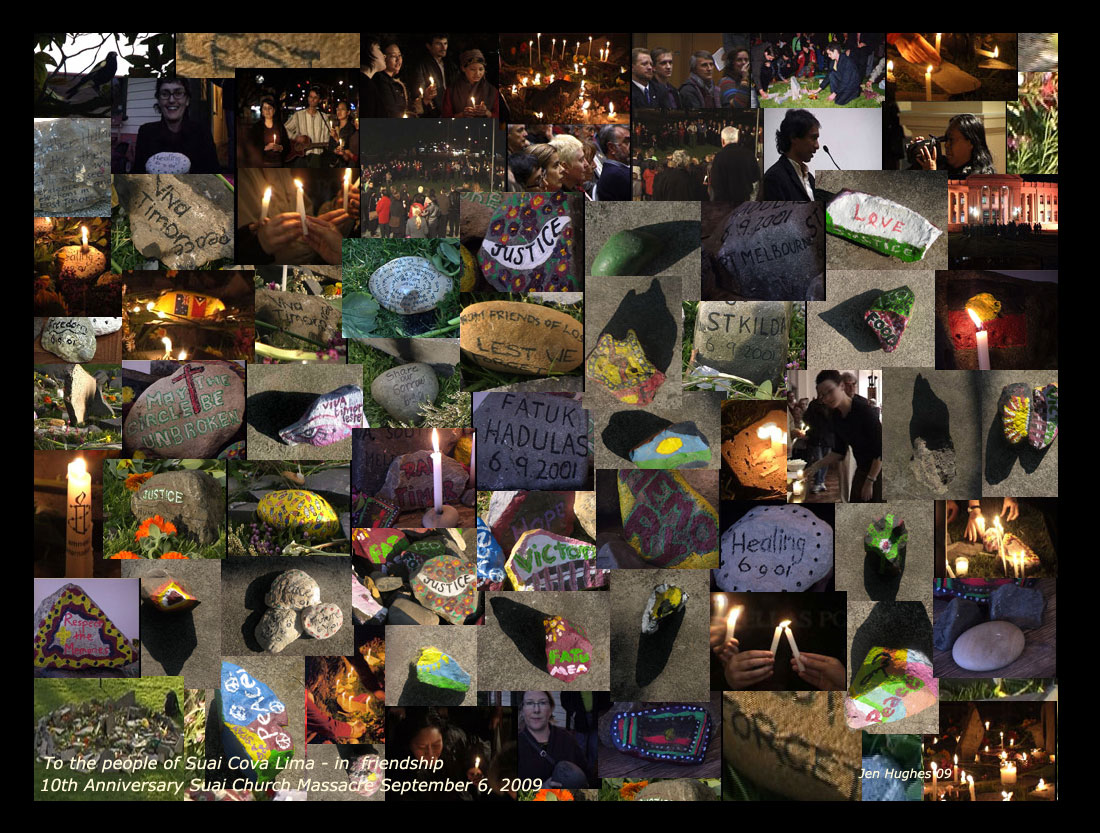 Rocks written painted and drawn on in 2001 by members of the Port Phillip community, at the Second Anniversary of the Suai Church Massacre are still  relevant.