At a meeting of the Council of Port Phillip in May an extension to the Friendship Agreement with Suai was agreed to in principal.

Since then the Friends of Suai have been celebrating the ten years with a range of activities. The first was an exhibition held in The Gallery St Kilda Town Hall in May-June titled Connections Across the Timor Sea – Memory Friendship and Future. Opened by the brand new Ambassador to Australia, Abel Guterres the exhibition showed the history behind the friendship that dates back to WW2 through the work of Sgt George Milsom father of local artist Liz Milsom. It also provided a platform in a physical gallery space for some of the most recent work of the media group here on Suai Media Space social network as well as some of the work by Suai youth in a Photography workshop held last year in YoMaTre.

On September 9 President Jose Ramos Horta will visit Port Phillip and attend a civic reception to be held in the St Kilda Town Hall. On the following day the 10th September Friends of Suai will hold a Schools Forum in the Town Hall. President Jose Ramos Horta will give a speech titled ‘Facing the Future’ about regional partnerships and getting connected with our Asian neighbours as well as the challenges and rewards for Australia. According to Co-ordinator of Friends of Suai Pat Jessen  a federal politician, still be be announced, will be speaking on the real challenges regional politics has for ordinary Australians.

Schools are invited to attend and participate in a plenary for students to consider what they think about staying connected with East Timor.

March 21st, 2010 jen Posted in Cars given by Friends to Suai, Friends of Suai News, Important Changes, Transport Comments Off on New Ute loading up for Suai 2010

The trusty four wheel drive ute that was the first gift of Port Phillip Council to the people of Suai has been retired. Left is a photograph of it doing its second task for the people of Suai. This photograph was taken when it was being used for the second time, when it was carrying palm fronds collected by locals to the grounds of Our Lady of Fatima School to provide shade for the First Anniversary of the Massacre in September 6, 2000. The first task was driving  a delegation of people from Dili to Suai following the Dili Congress in August 2000. And yours truly was on board with her first camera.  The photo below is next to Luna Park in March 2000 at the Launch of the Friends of Suai. The symbol of the friendship for ten years was mended and rehabilitated a couple

of times over the past ten years at great cost, until last year when it became obvious it had reached its retirement age.In the meantime the Friends of Suai team have used motor bikes and have often been lent the Suai Youth Centre people carrier that was given to them by  Rotary with the help of the Friends of Suai in about 2001.

Now Port Phillip Council has rehabilitated another Ute to send to Suai and some of the members of the Friends of Suai Committee are trying to fill it with goodies.  No photo to hand yet. This is a rare opportunity to send physical items to Suai so the FOS Committee in Port Phillip have begun thinking about what to send. John Collins is filling up a few boxes for storage containers from the St Kilda Library. Bill has bought some tools for Graci who helps everybody with everything. He runs the radio station – you can see him helping install the solar panels and he was a star pupil in my video workshop too. I even saw the designs he did for extending the CC that he did in Excel!  Pat is looking for five office chairs for the Community Centre and she has written to Office Works to see if they will donate stationery . FOS are looking for exercise books, pens, writing and drawing pencils, as well as coloured pencils again. Sounds like 2000 all over again, but  the schools never have enough resources so if any Port Phillip friends can help ring Pat. FOS are also appealing for money to put together 8 kindergarten boxes. 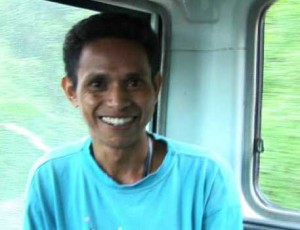 Alberto Barros who worked as the financial administrator for the Covalima Community Centre (Suai) for four years has been appointed as Acting Coordinator while Simao Barreto  is recovering from a stroke he incurred in January. Alberto is a very experienced community development worker who recently spent 6 months in Port Phillip studying English and is an experienced in financial accountability. Whilst he was in Australia he worked closely with Friends of Suai, representing his community at events here and meeting many from the East Timor network and partners in Australia. Alberto has the full confidence of Friends of Suai Committee to take up this role in Simao’s absence and will do a great job with the help of the Board of Commissioners and Suai leadership who have also expressed the approval of the appointment. 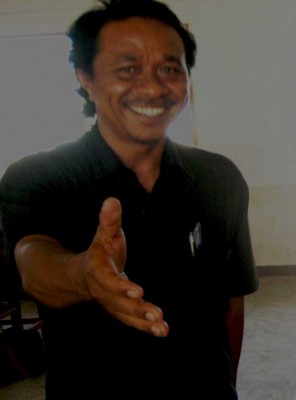 It is with deep sadness that we have to report Simao da Silva Barreto who has been the Coordinator at Centro Communidade Covalima (Covalima Community Centre-(Suai)  since 2006 and the Commission Chairperson at the Centre in 2005 had a stroke in January. The stroke has taken Simao’s power of speech and limited his mobility. He is undergoing physiotherapy in Dili and we all wish him a full recovery.

Simao has implemented many programs and projects at CCC funded by Friends of Suai and is an important community leader who also is Chairperson of the local community radio station Radio Taroman, a secondary-school teacher and tireless worker.

When Simao came to Australia in 2006 he told Friends of Suai the story of his great uncle who was killed by the Japanese in WW2. His great uncle was killed because he was found by the Japanese to have Australian coins in his pocket. He told me that his older brother said ”you must learn English and go to Australia and tell this story.” Well indeed he did tell this us this story and ensured that the friendship that began in WW2 has continued between our communities. He has also taught many others English as well in his role as a school teacher.  I trust that he will be back home together with his family soon and his future will be bright.

This beautiful photograph of Simao shows him at his happiest and best hamming it up as if he is meeting a stranger for Friends of Suai committee member and English teacher Desleigh, last year. Simao stayed with Desleigh in Port Phillip in 2007.