The Melbourne East Timor Activities Centre is in Belgium Avenue Richmond and on the first Friday of every month they put on a dinner.

Pay by donation and you can catch up with friends and rellies colleagues and others and often get entertained to boot. Jeff and I went last night and announced that an interview with Rufino Alves Correia the last living 'criado' of 2/2nd Company 'Sparrow Force' who served in East Timor in 1941 and 1942 will be posted for ANZAC Day 25th April in 'video' with an intro in this News category. It must have been in 2005 that Patsy Thatcher suggested I do this interview because Rufino is getting 'on'. I was helped by Elizabeth Expostu, Palmira Pires and Fernando Pires and Palmira's housekeeper Maria Barro who knew where he lived. Palmira and Elizabeth organised, Fernando picked me up and translated twice - rain washed us out the first time. The interview was done in February 2006. I'm in the process of editing the video and Patsy is checking his story against the 'official' Australian history. Patsy recorded the oral histories of the 2/2nd Company men and lent them to a historian who has never returned them! If you read this - who ever you are - please - do the right thing! Having access to these oral histories would help us because one of them belongs to Tom Nisbet Rufino's master and enduring friend. Rufino began as the servant ('criado') of Mr Harp but spent most of his time with Tom Nisbet and apparently a very strong bond developed between them. Rufino was approximately 9 years old when he was - to put it very politely - persuaded to work for Tom. According to Rufino every Australian soldier had 3 or 4 children each. According to Patsy Thatcher there were 'criados' or 'servants' who followed the men everywhere helping them in every way possible. The others were 'porters' . They played a different role and stayed in their villages which I gather were near the camps. The text with this Photograph refers to all these men as 'criados'. According to Patsy the other two men would have been porters not criados. Why is the difference important? Stay posted while I find out too! This will not be a history but a recollection by an old man with access to no written records or peers who shared his experience. 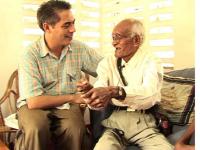 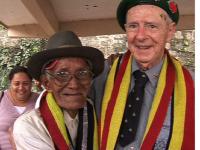 Left: Fernando Pires with Rufino Correia. Right: Elizabeth Exposto (background) Rufino with a Digger (Name to be dug out of video- or Patsy soon!) This image is a still ripped off video of the Dare Remembrance for the Anniversary of the Japanese Invasion and the first death of WW2 in East Timor on the 19th February, 2006. If you are interested in the history of World War 2 you might be interested in reading David Scott's Unpublished Chapters 'All They Got was Misery' and 'Japan - Reluctant Invaders'. These chapters are available in Tetun: Timor Oan Hetan Terus and Japaun - Relatante Invasores ( For translation: thanks for Alarico da Sena). You may also be interested in Jim Smaile's poem about the Australian invasion of East Timor and about the issue of truth in War taken from Archie Campbell's autobiography.