March 22nd, 2011 jen Posted in News Comments Off on All Youth News

All Youth news and updates are now in the social network.

Suai Media Space received news from Ergilio Vicente – Co-ordinator of the Covalima Youth Centre today that their film “Hadame Malu Hemu We Moruk’ – ‘Reconciled by Drinking Sacred Water’, won first prize in a film competition held as part of a recent film festival held in Dili.  The group won a video camera and a special commendation  from his Excellency President Ramos Horta.
Over the past 2 days the Youth Centre has been holding a series of activities with the Pre-secondary  students and Secondary students of Covalima.  In all 11 schools were in involved in the activities.  One was a Quiz contest among Pre secondary students and Secondary students drawing on the subjects of their study.and the other was a Magazine competition.  Ergilio reports Suai Media Space can expect some photographs soon and the video will be uploaded in the New Year when it arrives in Melbourne.

October 22nd, 2010 jen Posted in News Comments Off on Chamot

Chamot is a creative young man who spent several years training with the Bibi Bulak Theatre Company in Dili. He is currently the Co-ordinator of YoMaTre and the Uma Media in Suai. By clicking on the links below you can see his poetry and videos. Click here or on his profile photograph above to link to his profile page on Suai Media Space Social Network where he has uploaded songs he likes and many photographs and videos. 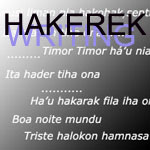 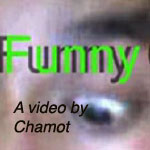 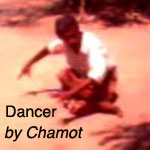 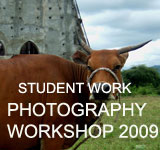 Click on one of the thumbnails to enlarge the photographs. A selection of photographs taken by Suai youth during a photography workshop facilitated by Richard Jones a Melbourne Documentary-maker and photographer and funded by the Friends of Suai. The photographs were exhibited in the St Kilda Town Hall Gallery in May 2010 as part of the Connections Across the Timor Sea Exhibition. More to come about this later …

October 7th, 2010 jen Posted in News Comments Off on Just a Comic Video

As Co-ordinator of YoMaTre and the Uma Media (Media House) in Suai Chamot has privileged access to the Internet. His first video uploaded to the suaimediaspace.ning.com was Dancer a short documentation piece showing a martial art dance in Kamenassa. This second piece is a comic take on the language gap between the two communities trying to make friends but hampered by the language barrier. Or  is it just Chamot’s first experiment with the computer camera? You be the judge.

No website about the Friends of Suai friendship is complete without a profile on Graci or Graciano Gusmao who quietly works away supporting everybody and anybody to help get his community back on it’s feet. This series of photographs will give you an idea of what I mean.

Graci drives us around, fixes things, installs things, learns how things work so he can help people who don’t have the same access or the same skills, or both. At first he pretended not to learn English on principle, preferring to try and get us all to learn Tetun. At some point he has learned English through exposure, or he has decided that he can be more helpful with the language, I have never asked him. I noticed more English  and more nodding in understanding in 2008 and Pat reported he was speaking to her in English when she was there in February. Graci was one of the people Egy included in the first Video Workshop – probably because he knew he could learn it quickly and pass on his knowledge to others. I got to know him better then. He always has Radio Taroman playing on his car radio or a tape in for our pleasure and his.  In the class I discovered Graci is incredibly democratic – always inclusive and willing to help others and he wasn’t shy about reprimanding others if he thought they were being rude or unfair. He is truly a man of the people with little interest in power but with a great curiosity and great capacity. His great love is architecture and the radio. He drew the first maps John Collins obtained of Covalima and he drew maps to help plan radio reception across the districts. He is absolutely beautiful with children and it’s impossible to drive around Suai without waves and smiles from people along the way who know him. Everybody knows everybody in Suai but this man is apparently well-loved. You can meet Graci in the social network. 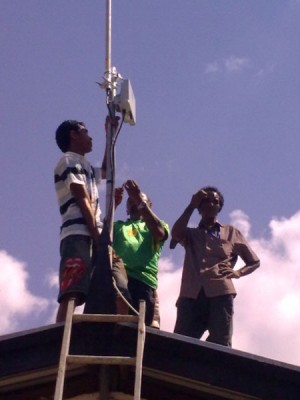 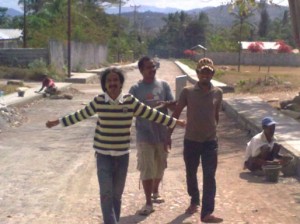 Chamot Egy and friend walking down the road with Egy carrying his laptop demonstratng that several hundred metres from the Youth Centre they have got a wireless signal? It must be a liberating feeling after so many years of feeling left out of the loop or waiting in queues at Timor Telecom.

Ergilio – Co-ordinator of the Cova Lima Youth Centre – Jen & Jeff ,filmmakers in St Kilda have been chatting on Skype using the new broadband access in Suai.

It took six years to get the video cameras and computers and ten to get Broadband but we did it, with a lot of help from others.

We chatted about what was happening in Suai in the past weeks and plans for the future – trying to work out what steps we want to take. 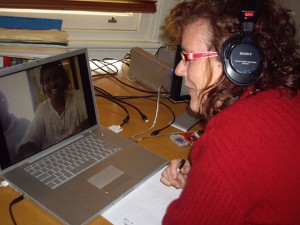 Egy has sent through photos of the satellite dish that has brought broadband access to the youth centre in Suai and a media house dedicated to regional journalism thanks to ICFJ. 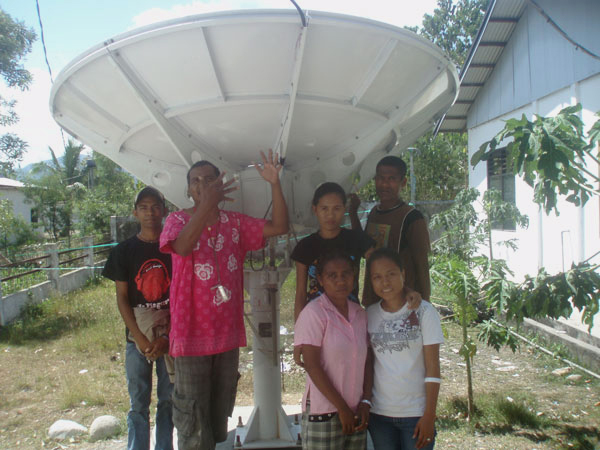 Egy in pink T Shirt with various others he has brought into the photo without giving names.