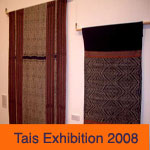 Titled ‘Exploring Meanings Makers & Markets of Tais‘ an exhibition of tais (the traditional cloth of East Timor) was held in the St Kilda Town Hall Gallery in September,  2008. It was held alongside a Forum to discuss the issues facing Timorese weavers since the referendum for independence in 1999. The exhibition was initiated by Dr Sara Niner and the Alola Foundation in mounted in partnership with the Friends of Suai, the East Timor Womens’ Association and the Melbourne East Timor Activities Centre.  Read more about the exhibition and the tais in Introducing the Tais of East Timor an article written by Jen Hughes with extensive quote from Dr Niner and an interesting response in the comments by expatriate Timorese Balthasar Kehi.

Note: on the first photograph and follow the next buttons by hovering the cursor a small distance from the top on the right hand side of the image. There is also a previous button opposite it on the left hand side of the image. For those who want to keep informed about the weaving stories you should click the RSS Feed button at the bottom of the post and you will receive an email each time I post a new story about weaving.