What is a criado? This article looks at the meaning.

Hear and see video stories straight from the last surviving criado in East Timor: Timorese  man – Rufino Alves Correia who served as one in WW2. Find out what their work was, how one young boy came to have his life changing experience working for a digger in WW2.

Criado means servant in Portuguese. But according to Patsy Thatcher who recorded the stories of all the members of 2/2nd Commando Squadron, to them it meant “little mate”. According to Ayris in ‘All the Bull’s Men’ :

“The criados’ average age was thirteen, though some were as young as nine or ten. They begged to be allowed to help the Australians and, once accepted, they stuck with them, hefting their equipment, finding them food and water, washing their clothes, acting as guides, becoming their eyes and ears, bringing them little luxuries such as fresh fruit and meat, and carrying their weapons to lighten their load when being pursued by the Japanese. Close relationships developed between the soldiers and their criados that sometimes lasted long after the war”.

For a first hand account of the experiences of Rufino Alves Correia. In his account Rufino does not say he became a criado voluntarily but he doesn’t say he went against his will either. He does mention running away and being brought back. The Australians according to Ayris

“…had quickly realised that their survival would largely depend on the Timorese and that they would be relying on them for their food, their knowledge of the land, their bush telegraph which kept them informed of everything that happened anywhere on the island – and for their value as guides, porters and intelligence gatherers. In short, they were indispensable. The Australians also appreciated that if they lost their goodwill, and the Timorese sided with the Japanese, all the qualitites they valued them for would work against them. If that happened they would have no chance.”

According to the histories and people I have spoken to, to date the criados were not given guns or involved in action. Rufino says he was and describes some of them in detail. His stories don’t match the stories of the Australians, but how could they after all these years without peers, with the Indonesian occupation and no written records. It’s up to us to accept the complexity of history, story and memory and the complex process of interview and answer across time and generations of cultural change.

This photograph seems to epitomise the love and respect that grew between these young boys who worked for and alongside the Australian soldiers trapped in East Timor in 1941-1942. Aged between 9 and 11 years these little boys frequently saved the lives of Australian men. 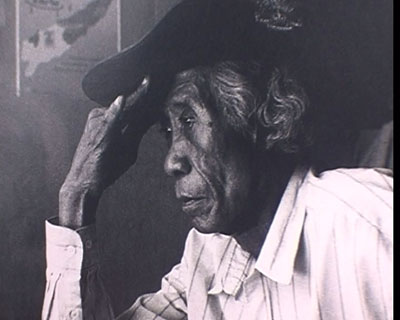 This is a photoraph of Joaquim da Silva taken by Michael Coyne. Michael took the photograph of Joaquim when he and Graham Pitts were in Dili in 2001 to present Graham’s play ‘Tour of Duty’.

There is another criado story in ‘All the Bull’s Men’ about a nine year old boy who was speared in the neck by Timorese, on the orders of the Japanese, for proudly admitting his loyalty to the Australians. His name is Akiu. When Akiu survived the Australians apparently kitted him out with a hat. There is a photograph of Fernando another small boy who has been “kitted out” with a slouch hat and a rifle on the Australian Memorial website.

According to Graham, Joaquim had a photograph of the small boy with the rifle and the slouch hat and he was insistent that the photograph of ‘Fernando’ is in fact him in 1942.