Paul’s brother Tony Stewart was killed by the invading Indonesian military in Balibo when he was only a young journalist. He was 21. Paul first became famous as a member of the Painters and Dockers a popular Melbourne band. Later he became a founding member of the Dili Allstars who kept the music going in the independence movement in Australia. I first saw the Dili’s play at the launch of the Friends of Suai next to Luna Park in March 2000 and this photograph is taken from that video. You will find music from the Dili Allstars throughout suaimediaspace. Paul lived in Port  Phillip for a long time in St Kilda. Paul recently won a prize for his short story in the Essence of St Kilda competition titled The Essence of St Kilda.  The story give some insights in to the history of St Kilda but also the characters from St Kilda who were involved in WW2 and the visiting American GI’s. 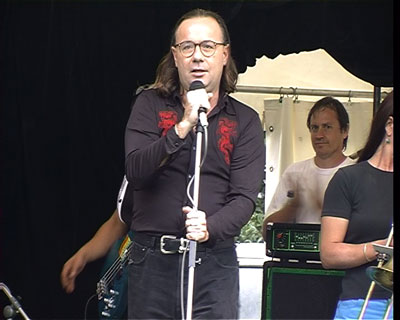 o check them out in the gig guide. External link to news footage about their concert in Dili in 2000.

Paul Stewart’s response the 2007-2008 Australian Commission of Enquiry into the Balibo Five Murders .