One of the tasks of this site is to help bring justice to the people of East Timor by keeping memories of the atrocities against them alive through ‘Acts of Remembrance’. My friendship with East Timor began with a massacre – the Suai Church Massacre. 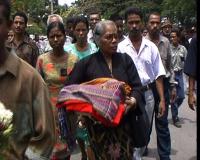 Veronica carrying her commemorative tais in a massive procession from St Motael Church to the Santa Cruz Cemetry November 12, 2000

This November 12, 2007 is the 15th Anniversary of the Santa Cruz Massacre. Follow this link to learn the published history www.etan.org/timor/SntaCRUZ.htm. This moment in East Timor’s history is particularly sad, for East Timor lost 271 young teenagers and students. Either dead or missing it left many people with the loss of all their children and no bodies around which to build a mourning process.

The woman in the procession carrying the tais is Veronica Pereira. In an extraordinary act of love and remembrance Veronica wove five tais with the names of all the youth who died or disappeared into them, to create an everlasting symbol of their sacrifice. The documentary about Veronica will be uploaded next year under the title ‘Returning the Tais’ to Timor.

Social Events
This weekend about twenty young Timorese who are in Melbourne are performing a play written by Filomena dos Reis that she describes as “telling the story of the Timorese youth of the past, present and future.“