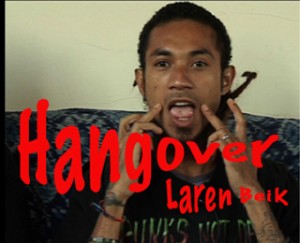 I just heard the news that Galaxy is coming to Melbourne and that there is to be an exhibition by Arte Moris. I’ll post dates when they come to hand.

Checkout our Interview with charismatic punk Galaxy lead singer Meli with good friend Annie Sloman when they were in Melbourne in 2006.

From their original headquarters in a bombed out house in their hometown of Los Palos, Galaxy has risen from the trauma and chaos of the independence struggle to become one of the most well-respected bands in the world’s newest nation.

Adored by the masses of youth, these tattooed, deadlocked young men are often feared and misunderstood by the church leaders and elites. Galaxy exemplifies rock’n’roll in its essence as the wild energy and raw emotion of youth, all the more powerful and genuine due to the real-life revolutionary context from which they come. With their unique blend of rap, funk, acoustic and hard rock meeting the traditional rhythms of the Fataluku people of the east of Timor and the resistance songs of the independence movement, Galaxy is truly a leader in contemporary Timorese music. Check it out

Renowned for tackling tough issues and taking a stand, Galaxy sing candidly about the Timor gap, AIDS, corruption, Timor’s history and the struggle of daily life in a poor and recently independent nation. After playing in every conceivable situation from stadium concerts to lonely mountain towns Galaxy know how to please.

Galaxy are based in Dili at the Arte Moris (Living Art) free art school, where they are supported by Bibi Bulak (Crazy Goats) Performance Arts and Music Troupe which works in theatre, film, dance, music, radio, TV, circus and writing. When not in the studio, Galaxy teach percussion, jembe, music, visual artists at Arte Moris & Bibi Bulak and work as visual and tatoo artists.

One Response to “Galaxy coming to Melbourne & Portugal”