The Circle of Silence 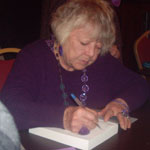 “Shirley Shackleton was launched into an unexpected life as a human rights activist when her journalist husband Greg Shackleton was killed in East Timor in 1975.” This is the introduction to Shirley Shackleton’s autobiographical account of her life titled ‘The Circle of Silence’ published this year. 'A compelling personal insight into a defining time in our history. Shirley Shackleton's courage is inspiring'Robert Connolly, Director, Balibo 'The Circle of Silence' provides a profoundly disturbing insight into the kind of Australia we actually live in and Shirley Shackleton's story is moving and inspiring for her tenacity and courage in the face of terrible odds and very powerful enemies in the form of Australian leaders, who clearly do not share the values held dear by most Australians who voted them into power. The following is a slideshow of photographs taken at the book launch organised by the Australia East Timor Association in May 2010 featuring two of the posters they published in the 1980's to raise awareness to the plight of East Timor.
[Show as slideshow]