I met Filomena when she was in Suai for the First Anniversary of the Suai Church Massacre in September 2000. She was directing a re-enactment of that massacre to assist with the healing of the people of Suai. The re-enactment was accompanied by an appeal, to the international community present, for justice.

I didn’t see Filomena again until 2005 briefly when she was here for a conference. The first film I made titled ‘The Circle of Stones’ intercuts Filomena’s play with the story of the Suai Church Massacre and the grieving taking place in front of Our Lady of Fatima Church in Suai where the massacre took place. I had sent her a copy of the video and I knew somehow that she had taken it to the U.S. in 2002 when she made a tour of that country saying “the women of East Timor are screaming for justice” . I think I read an article in the paper titled ‘Screaming for Justice’.

On this trip Filomena stayed with me and told me a lot more about that film and how she used it. When she was invited to speak to the U.S. Senate Filomena elected to screen ‘The Circle of Stones’. We are still waiting for justice. Filomena has a funny story to tell about this so I’m looking forward to her telling here in this space in the near future. 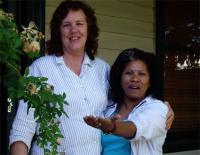 This poem written in 1999, has been published in ‘Written in Blood’ by Filomena Barros dos Reis. Performed November 10th 2007 at the Boite Cafe to Commemorate the 15th Anniversary of the Suai Church Massacre.