Louise Byrne has become a good friend of mine. Louise began working with East Timorese people living in Melbourne in 1991. In 2000 Louise suggested that I meet Veronica Pereira and go to Suai with her so that I would “get in deep” and meet people who would help me understand Timorese culture.

Louise’s knowledge of Timorese culture stems from her study and her work and friendship with Timorese people. When East Timor won the ballot for independence in 1999, Louise had Jacob Rumbiak living with her. As she received call after call from people asking how they could help East Timor recover she had a growing sense of unease. Jacob was working quietly alone in the corner for self-determination for West Papua. the Papuan people were, and still are, suffering from the same repression and violence under the Indonesian military in their country, as that experienced by the Timorese for 29 years.So, Louise switched boats, so to speak. Now she works for Jacob. But not before she sent me off with letters of introduction to East Timor. She chose to have this photo of herself with Yambon because it brings with it the story of the West Papuan people. 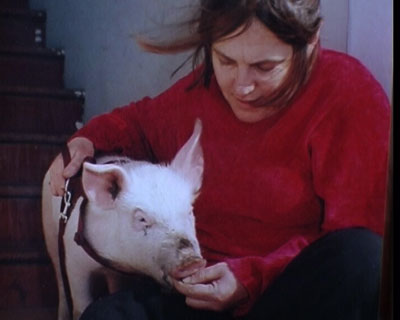 Story written by Louise about an extraordinary night spent in St Patricks Cathedral with the Timorese community in Melbourne on September 9, 1999, only three days after the Suai Church Massacre and the night before the protests held in the streets of the big cities of Australia that led to Interfet being formed.